The Complete History Of The NBA

Every franchise’s relative strength after every game. How this works »

How do you rate an NBA team across decades of play? One method is Elo, a simple measure of strength based on game-by-game results. We calculated Elo ratings for every NBA (and ABA) franchise after every game in history — over 60,000 ratings in total.

Elo ratings have a simple formula; the only inputs are the final score of each game, and where and when it was played. Teams always gain Elo points for winning. But they get more credit for upset victories and for winning by larger margins. Elo ratings are zero-sum, however. When the Houston Rockets gained 49 Elo points by winning the final three games of their Western Conference semifinal during the 2014-15 playoffs, that meant the Los Angeles Clippers lost 49 Elo points.

A rating of 1500 is approximately average, although the league average can be slightly higher or lower depending on how recently the league has expanded. (Expansion teams begin with a 1300 rating.) Select a team above, and zoom in to explore its history.

1990s Bulls: Formerly The Best There Ever Was 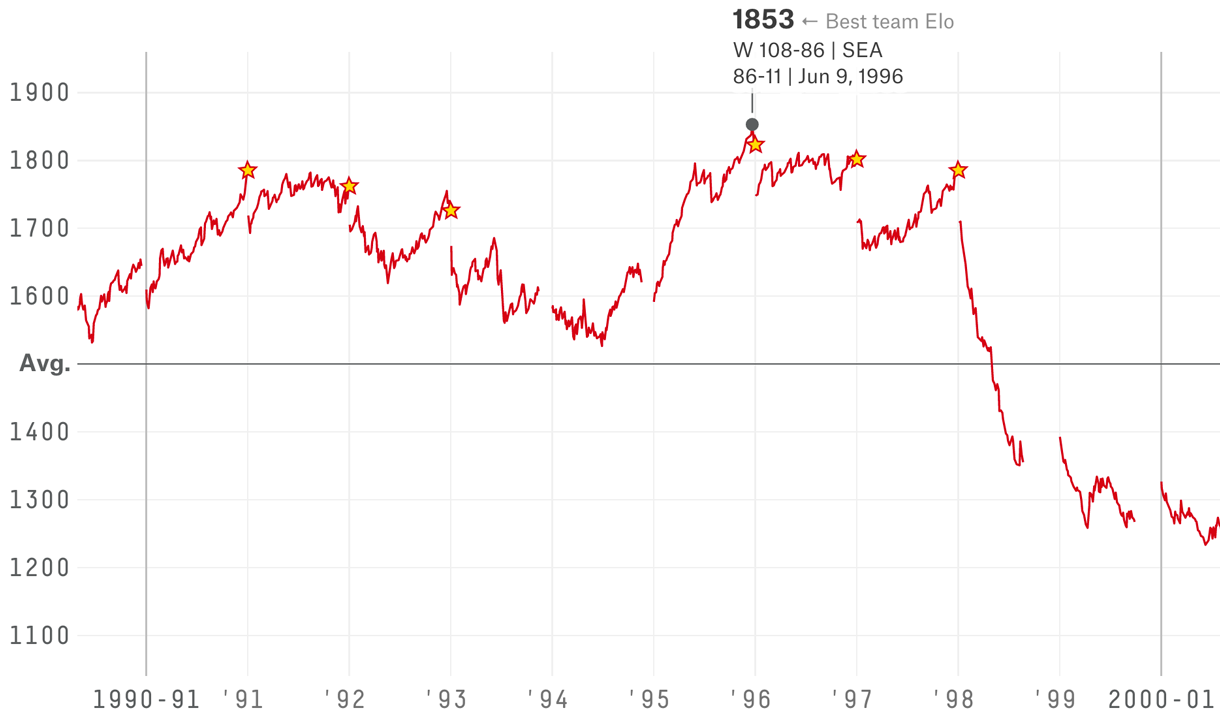 It’s no surprise that the 1995-96 Chicago Bulls — with 72 regular-season wins — had the best Elo rating ever until they were surpassed by the Golden State Warriors in Game 1 of the 2017 NBA Finals. Chicago picked up its fourth NBA championship at the end of that season, but the Bulls hit their peak Elo (1853) a few games earlier when they stomped the SuperSonics 108-86 in Seattle to take a 3-0 lead in the finals and improve their playoff record to 14-1. Chicago went into a “slump” for the next two games — losing both by double digits — before clinching the title in Game 6.

The Lakers’ 33 Games To Greatness 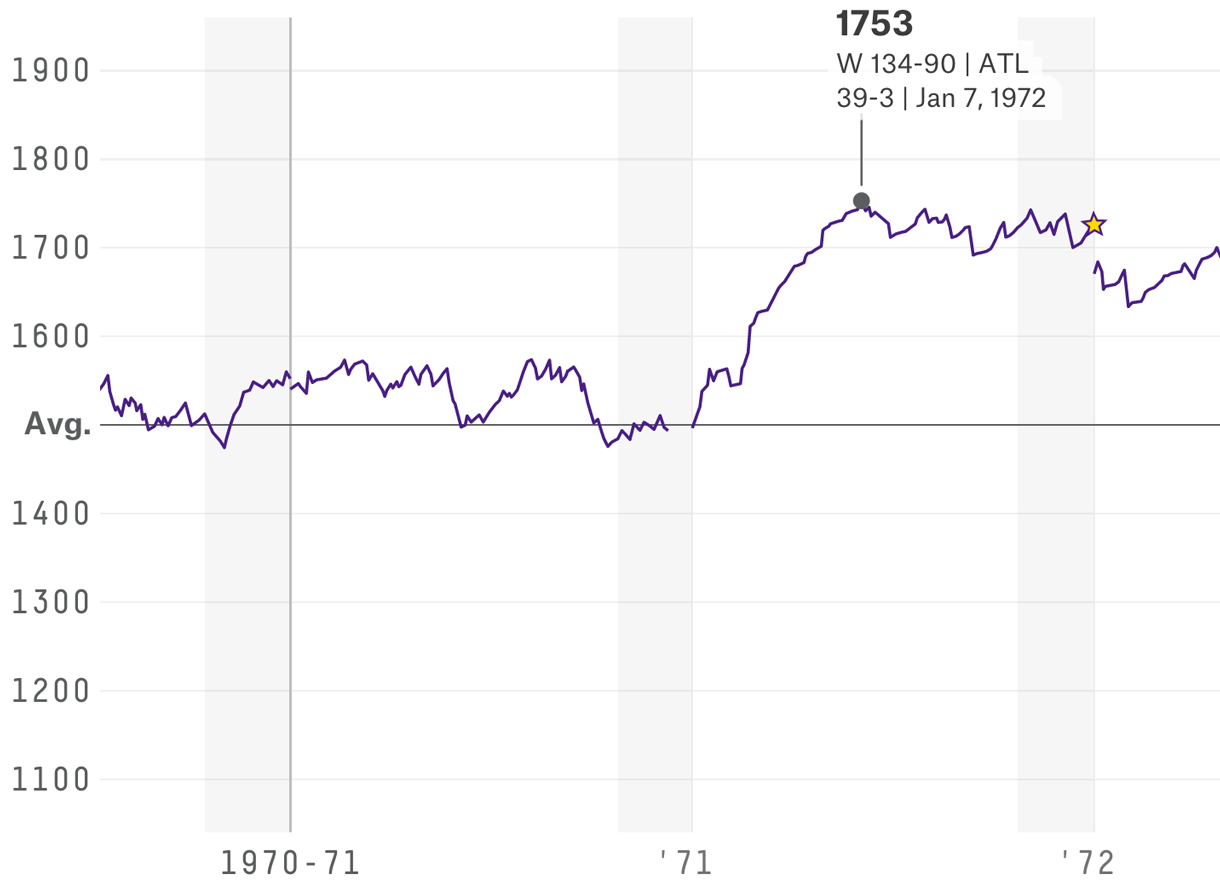 Going into the 1971-72 season, the Los Angeles Lakers had a middling 1496 Elo rating, in part because their competition was watered down by the NBA’s rapid expansion (the league had gone from nine to 17 franchises in the span of several years). And anchored by aging veterans Elgin Baylor (37 years old), Wilt Chamberlain (35) and Jerry West (33), the team was supposed to be approaching the end of the era, a perception strengthened by Baylor’s retirement just nine games into the season.

The ’60s Celtics Don’t Get Any Respect 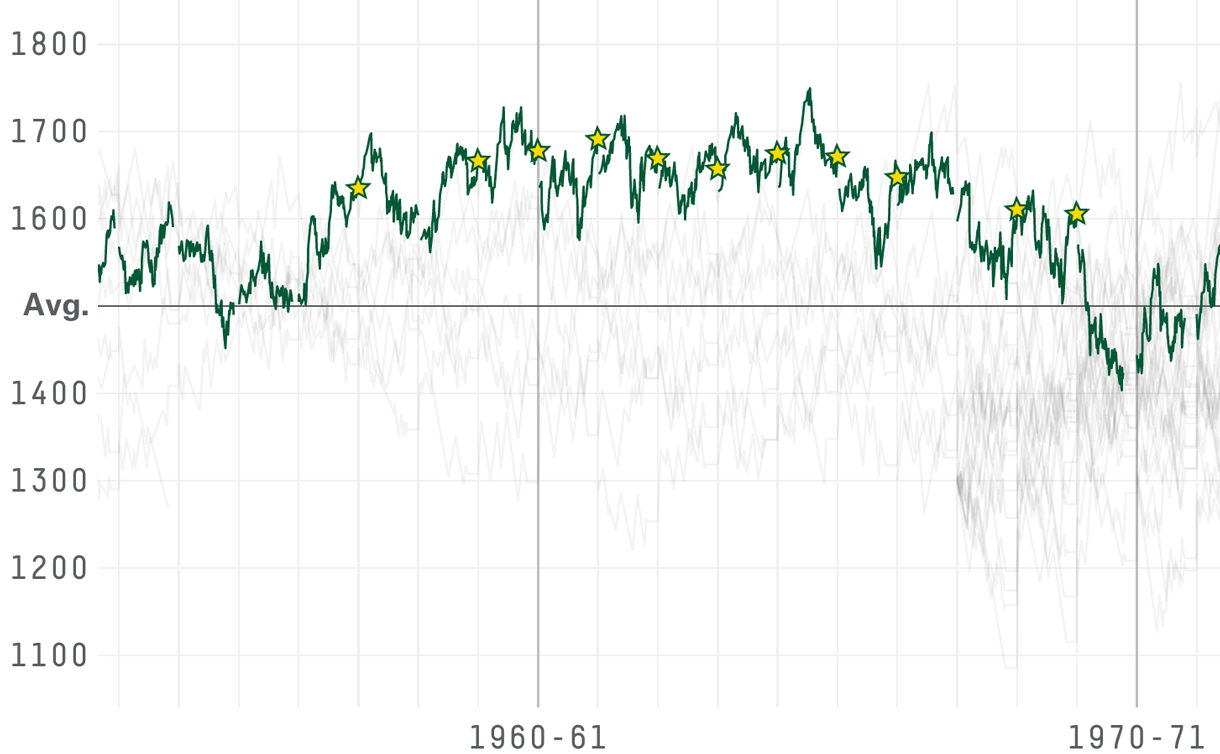 The Boston Celtics won 11 of 13 NBA titles from 1957 through 1969, a dominance unparalleled in modern sports. Elo doesn’t care about rings, though, and knocks the Celtics for their weak opponents and occasionally lackluster regular seasons (at least relative to their playoff achievements). Still, the Celtics’ Elo rating hung around 1700 (really good) for much of the era, and the team maintained an above-average Elo rating for over 13 years. Only the 1980s-era Lakers and the current San Antonio Spurs, a team with which those Celtics have a lot in common, put together similar streaks.

The Knicks Peaked A Long Time Ago

The 1969-70 season was a great one for New York basketball. Led by Willis Reed, Walt Frazier and Dave DeBusschere, the Knicks were 23-1 through Nov. 28 and hit an Elo rating of 1712 — the highest in franchise history. Things were a little less smooth after that: New York went 37-21 to close out the regular season and was taken to seven games twice in the playoffs. By the time the Knicks won the franchise’s first title in May, their rating had fallen to 1591.