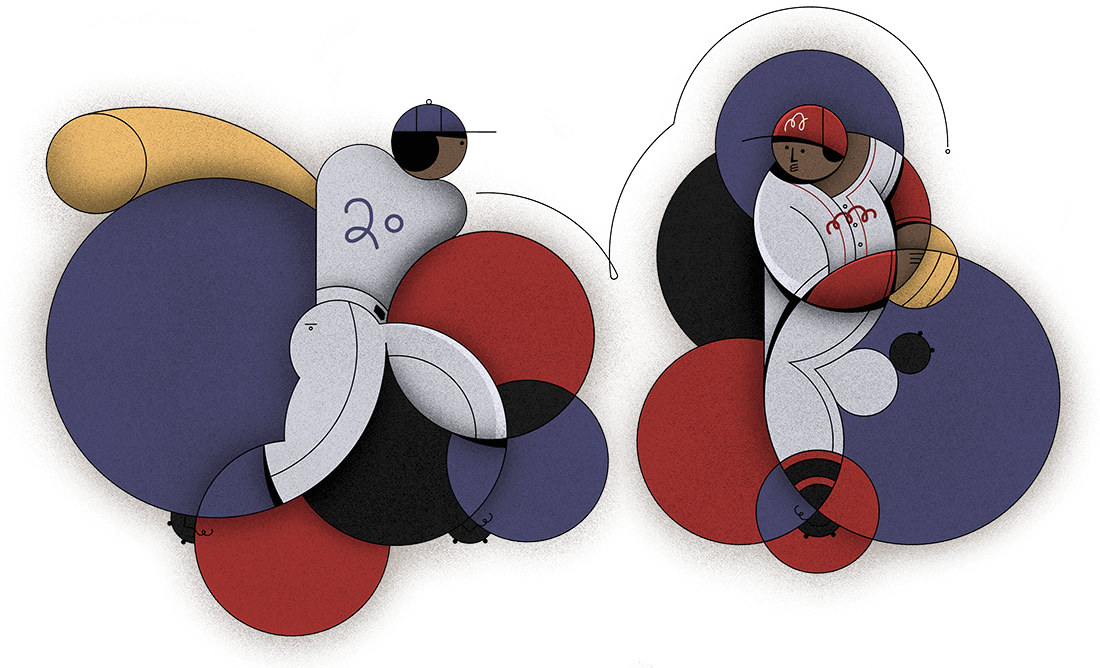 Get the data on Github

Major League Baseball’s long-overdue decision to recognize the statistics of players from the Negro Leagues means that MLB’s record book is expanding. A few high-water marks are likely to change hands: The best single-season batting average in history1Currently held by Hugh Duffy, who hit .440 in 1894 for the Boston Beaneaters. will belong to Josh Gibson, who hit .441 in 1943. Hall of Famers like Gibson and Satchel Paige are likely well-known to modern fans, but other greats may not be as familiar — and comparing them to current players and historical MLB figures is a little harder to do. Luckily, thanks to the indispensable Seamheads Negro Leagues database, we can put these players’ accomplishments into context using wins above replacement (WAR).

To qualify, a batter must either have played at least 300 career games (for active or Hall of Fame players) or 150 in the Negro Leagues. A pitcher’s qualification is based on his total number of games plus his number of starts; active or Hall of Fame pitchers must have at least 350 games plus starts, while Negro Leaguers must have 60. Stats are not combined for those who played in both the Negro Leagues and MLB. Current players are those who played in either 2019 or 2020, including those who have recently retired.

Roughly 3,400 men who played in seven Negro Leagues2The two Negro National Leagues, the Negro American League, the Eastern Colored League, the American Negro League, the East-West League and the Negro Southern League. For this story, we included only the statistics compiled in those leagues — and against opponents in the Negro Leagues. from 1920 to 1948 will be recognized. We wanted to get to know the most prolific of them on more of an individual level, so we created an algorithm to compare them with active players and Hall of Famers. First, we broke down each player’s skill set relative to his peers, looking at performance in a variety of categories. Then, we found the set of players whose strengths best match those of the star we’re learning about.3The method bases similarity of the concept of least squares, which sums up the squared differences in ratings between any two players and considers players with a smaller difference to be “more similar.” The only twist is that we also applied varying weights to each difference, in proportion to how important the category is to WAR, to make sure that the most significant categories play a larger role in determining similarity.

The greatest pitchers of the Negro Leagues — and their current comparables

“I never threw an illegal pitch. The trouble is, once in a while I toss one that ain't never been seen by this generation."

Let’s start with pitchers. Tall right-hander Satchel Paige is probably the most famous Negro Leagues player of all time, and with good reason: According to Seamheads, he was their all-time leader in pitching WAR with 39.3 in his career — or an average of 7.1 over a 162-game season.4While MLB began playing 162-game schedules in 1961, the Negro Leagues usually played shorter campaigns, with season lengths that varied greatly depending on the year and the league. To help adjust for these differing schedules, we’ve borrowed Baseball-Reference.com’s method of prorating stats to 162 games for both batters and pitchers. Paige was a true strikeout artist, whiffing 8.5 batters for every nine innings he pitched, easily making him the best of his era in that regard. He also had the best fielding-independent pitching (FIP) mark of any Negro League pitcher, which is why he compares well to the great Pedro Martínez and to Corey Kluber, Chris Sale and Jacob deGrom (among active pitchers).

On a per-game basis, however, there were some other pitchers who were close to (or even better than) Paige’s 7.1 WAR per 162 games. In fact, José Leblanc’s 7.8 rated higher, though he didn’t pitch as long — he died tragically after an on-field fight in 1922. Among more tenured Negro League pitchers, Ray Brown’s 6.8 WAR per 162 challenged Paige as well. Brown won 122 games in 14 seasons, best in the Negro Leagues, establishing himself as ace of the storied Homestead Grays … and as a talented outfielder, too, on days between starts.

The greatest batters of the Negro Leagues — and their current comparables

“Oscar Charleston was the Willie Mays of his day. Nobody ever played center field better than Willie Mays. Suppose they had never given Willie a chance, and we said that, would anybody believe there was a kid in Alabama who was that good? Or there was a Black guy in Atlanta who might break Babe Ruth's home run record? No.”

On the batting side, the Negro Leagues’ most valuable position player was the brilliant Oscar Charleston — 48.9 total WAR — a blazing-fast outfielder who was also one of the greatest ever when it came to hitting for both average and power. Among current players, Charleston’s two most similar comparables are Mike Trout and Ronald Acuña Jr., while his most similar fellow Hall of Famer is Tris Speaker. His addition to the official ranks of MLB players instantly makes Charleston one of the greatest major leaguers ever to play the game — not that he needed the affirmation to cement his status as a legend.

On a per-game basis, several stars of the Negro Leagues were even better than Charleston’s 8.6 WAR per 162. Hall of Fame catcher Josh Gibson, who racked up 10.9 WAR per 162, hit nearly 800 home runs in his long career across multiple pro leagues, and he has a well-deserved reputation as one of the most feared sluggers in baseball history. But the others — Dobie Moore with 10.4, Charlie Smith with 10.3 and Willard Brown with 9.3 — aren’t talked about as much. Moore was a Francisco Lindor-like shortstop with all the tools at his disposal before an injury ended his career early. Smith, meanwhile, was the Mookie Betts of his day; his life was cut short by yellow fever at the age of 30. And Brown was a type of great player we don’t see quite as much in today’s game — a fast outfielder with a great bat who didn’t walk much — but he had a lot of Hall of Fame company with Andre Dawson and Roberto Clemente as top comparables.

“[Dobie] Moore was one of the best shortstops that will ever live! That fella could stand up to the plate and hit right-handed, he could hit line drives out there just as far as you want to see.”

Pick a Hall of Famer

Who among the newly recognized Negro Leaguers is comparable to those enshrined in Cooperstown? Select a Hall of Famer5We only looked at Hall of Famers active from 1901 — the first season of the American League — onward. and find the most similar Negro Leaguers based on their skill sets.6If you select a Negro League Hall of Famer like Gibson, you’ll see his comparable players from MLB. Players who qualified for their careers in both the Negro Leagues and post-integration MLB have two sets of profiles. Several players best known during the post-integration era — such as Hank Aaron and Willie Mays — played in the Negro Leagues as well, but they are also included in the Hall of Famer list below. Statistics are given according to league qualification: Aaron’s stats are all from his MLB career, while Paige’s are from his Negro Leagues days.

These comparisons help offer a glimpse into baseball’s biggest, and most shameful, unanswered question: What if the game had not been segregated for nearly half of the 20th century, and instead these Negro Leaguers were able to play alongside the rest of the game’s greats, free from the discrimination of the color line? It’s a legacy that MLB cannot — and should not — ignore, nor gloss over with this recent change in major league status. Countless exceptional players were robbed of the opportunity to achieve the same fame as their white counterparts, and this data shows the kinds of performances that should have been in MLB’s record book all along if not for the ugly structural racism in baseball’s history.

Meet the stars of the Negro Leagues

Choose which position to focus on, and use the filters to reorder the players from the best in each stat to the worst.