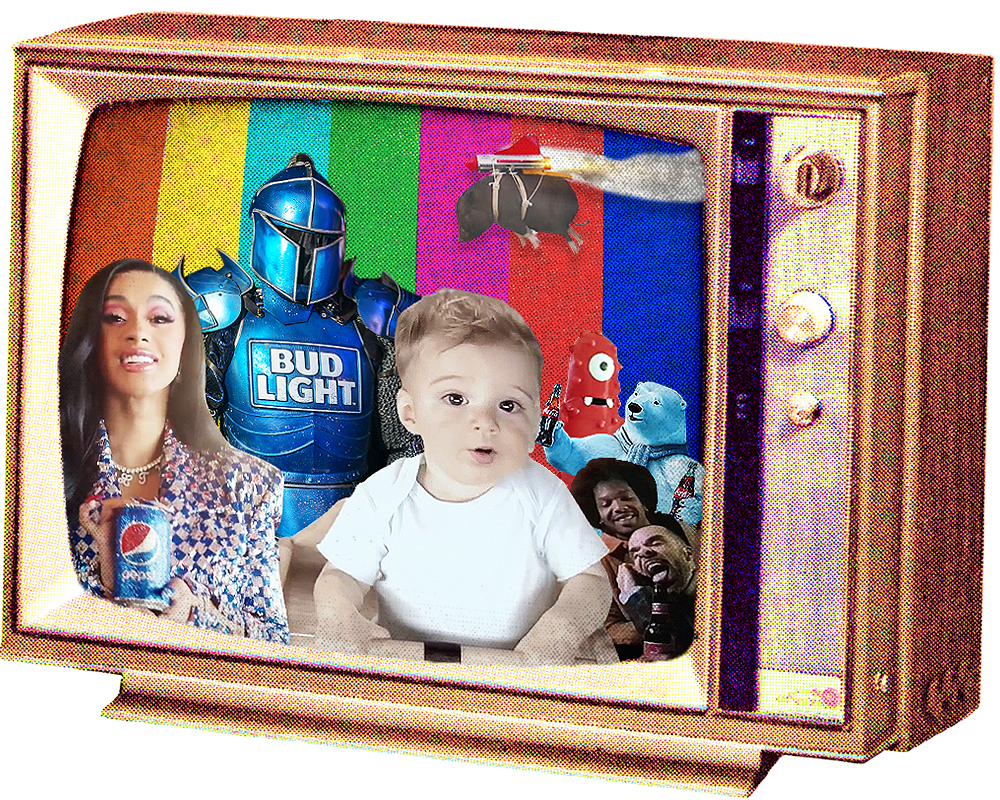 Sometimes even all at the same time.

Get the data on GitHub

Like millions of viewers who tune into the big game year after year, we at FiveThirtyEight LOVE Super Bowl commercials. We love them so much, in fact, that we wanted to know everything about them … by analyzing and categorizing them, of course. We dug into the defining characteristics of a Super Bowl ad, then grouped commercials based on which criteria they shared — and let me tell you, we found some really weird clusters of commercials.

Was it trying to be funny?

Is the ad jokey, goofy, weird or silly? Funny commercials (or ones that are trying to be funny) are a clear “yes” here. Anything serious or dramatic is a “no.”

Did it show the product right away?

Can you tell what is being advertised within the first 10 seconds of the commercial? If you can see the product or brand name on the screen, that counts.

Did the commercial make a patriotic appeal, either clear or subtle, or include American imagery? Any glimpses of an American flag or the words "America" or "United States" counted, as did references to the armed forces, manufacturing and farming.

Did it feature a celebrity?

If we saw a celebrity we recognized, we checked this one off.

Did it involve danger?

Did we see any violence, threats of violence, injuries, fighting or guns? Any allusions to death or hokey injuries also counted here.

Did it include animals?

Did an animal — either real or computer-generated — show up at any point in the ad? Even one-frame appearances counted.

Did it use sex to sell its product?

We counted any subtle or overt suggestions of sex, sexuality, sex appeal or nudity.

Seeing which commercials matched any one of these categories was interesting enough in its own right — like how many Bud Light commercials, especially from the early 2000s, made particularly lewd jokes. But we found some unique, bizarre and even downright disturbing commercials when we looked at ads that showed up in multiple categories, especially criteria that you would think couldn’t fit together in a single ad.

Danger + Not Trying To Be Funny

These ads probably aren’t what you think of first when it comes to Super Bowl commercials. They feature danger, violence or injury, but not as the punchline of a joke. This cluster is home to a few real tear-jerkers2How did I get so emotional watching a lost puppy being saved from an angry wolf by the Budweiser Clydesdale horses? and some attempts at inspirational unity.3Prime examples are Budweiser challenging what it means to be a “typical American” and Pepsi flipping video game violence into a message to spread kindness.

One 2001 E-Trade ad stood out in this category for me, though, because it was just so odd out of context. This commercial plays like the ending of an emotional Western — we watch a chimp riding a horse through an abandoned ghost town of failed businesses. This tension crescendos with a sock puppet factory being violently razed by a wrecking ball as a discarded puppet lands at our protagonist’s feet. The chimp cries over the devastation it has just witnessed, and the screen fades to black — only the words “invest wisely” are left. E-Trade was poking fun at all the dot-coms that had gone under during the previous year, including Pets.com — there are some clear nods to Pets.com’s 2000 Super Bowl commercial, in which its sock puppet mascot sings a bad karaoke version of Chicago’s “If You Leave Me Now.”4Which ended up being an ominous and foreboding song choice, considering Pets.com would be completely liquidated within a year of its sock puppet mascot serenading us and our pets, pleading us to not leave it behind. This E-Trade ad was well-received at the time, but 20 years later it came across to me as deeply sad.

The 12 ads in this cluster combined patriotic symbolism with celebrity endorsements.5NFL ads prominently featuring NFL players and personas were marked as having celebrities for the sake of this analysis. There was a pretty wide range in how overtly political these commercials got — from Bob Dylan crooning over images of soldiers reuniting with their families to Carlos Mencia teaching immigrants how to hit on “American” women in a commercial that reaches levels of insensitivity way beyond uncomfortable.

But the silliest commercial in this group was a Pepsi ad from 2001 that featured former Republican Sen. Bob Dole talking about a big bottle of Pepsi like it was Viagra while walking on a beach, hitting on women and nailing a backflip.6And when I say “Bob Dole nailed this backflip,” I mean a very obvious Bob Dole stunt double nailed this backflip. This commercial was a parody of a 1998 ad campaign Dole did with Viagra, and it even features a small part played by Eric Stonestreet — now an award-winning actor known for his role as Cameron Tucker on ABC’s “Modern Family.”

This category was truly the most unsettling of the bunch for me, especially considering how many commercials met the criteria. There was a wide range of approaches in how advertisers combined these categories, though, with some more disturbing than others. On one end are ads that sell sex while an animal happens to be in one of the shots — the Bob Dole Pepsi ad shows him walking on the beach with his dog, and a Budweiser ad that centers on some crabs stealing 7And subsequently worshipping. a cooler of beer makes sure to sneak in frames of women in bikinis. These ads sell sex, and these ads have animals, but they’re not really fundamentally intertwined.

At the other unholy end of the spectrum, though, are Bud Light ads in which a talking chimp hits on a woman and a falcon brings back a woman’s bra to its handler after attacking a city block on the hunt for beer. The only thing more unsettling than watching these bizarre commercials is realizing a whole boardroom approved these concepts for what was a likely multimillion-dollar ad spot. The commercials in this cluster really cover the full spectrum, so watch at your own risk.

Show me Super Bowl commercials that and