The Complete History Of The NFL

Every franchise’s relative strength after every game.

More NFL: Predictions for the 2019 season

How do you rate an NFL team across decades of play? One method is Elo, a simple measure of strength based on game-by-game results. We calculated Elo ratings for every game in league history — over 30,000 ratings in total.

Elo is set so that an average NFL team has a rating of about 1500, although the league average can be slightly higher or lower, depending on how recently the league has expanded — expansion teams start with a rating of 1300. You can read more about our methodology here; all game results are from Pro-Football-Reference.com. “Championships” include Super Bowl wins and pro league titles from before the Super Bowl era, including the winners of the National Football League, American Football League, and American Professional Football Association (but excluding those of the All-America Football Conference). There are over 90 defunct franchises in pro football history, but only those that played at least 40 games can be selected above.

Choose your favorite team, and zoom in to explore the entire history of professional football. 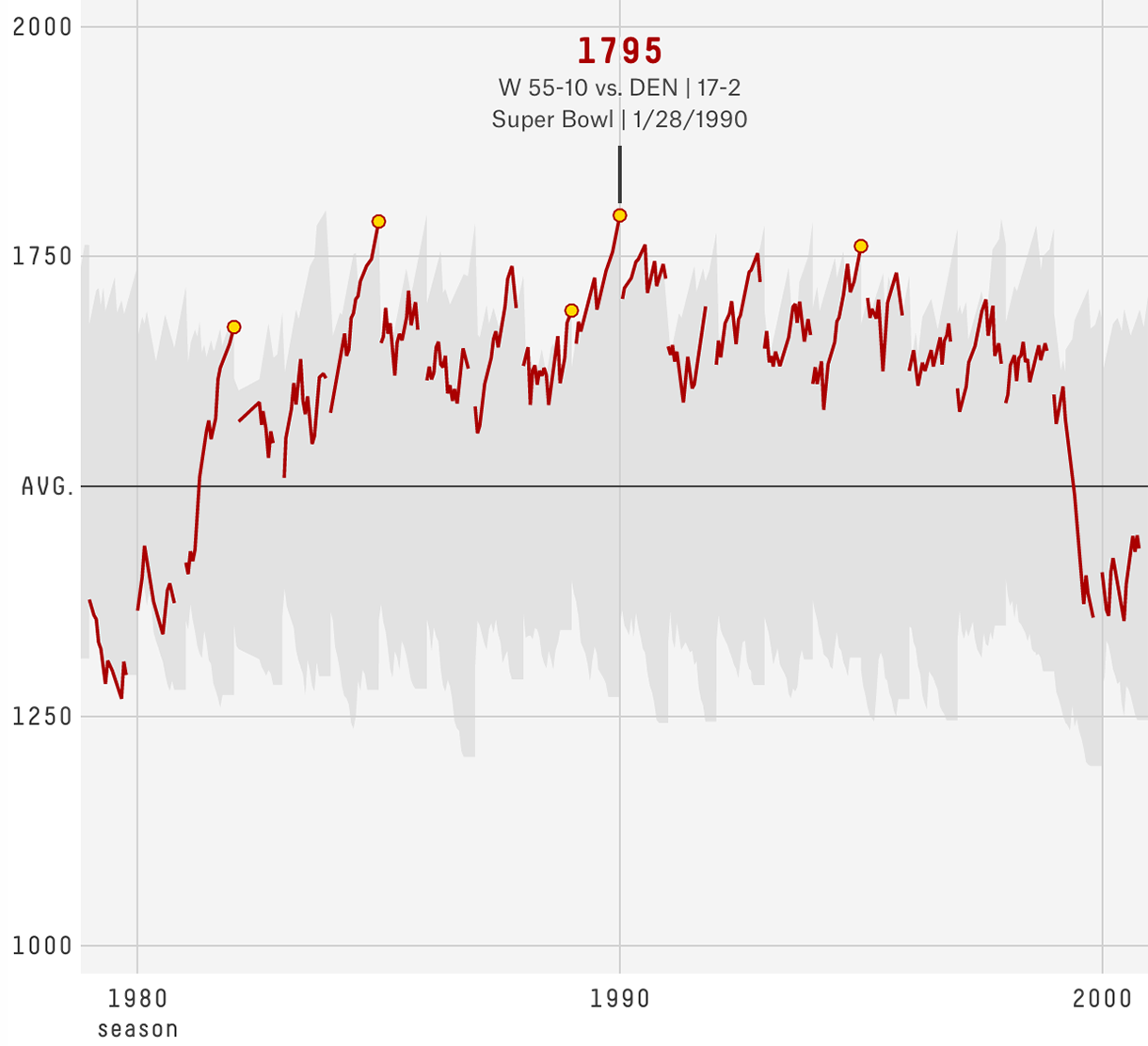 Before the New England Patriots’ Super Bowl win last season, we tried to calculate whether they had become the greatest NFL dynasty ever. The answer, as always, was that it depends on how you count. From 2001 to 2016, the Patriots’ average season-ending Elo rating was 1701, the best 16-season stretch in league history. But the best 17-season, 18-season and 19-season stretches belong to the San Francisco 49ers of the 1980s and ’90s.

The 1990s Cowboys — A Rebuilding Project 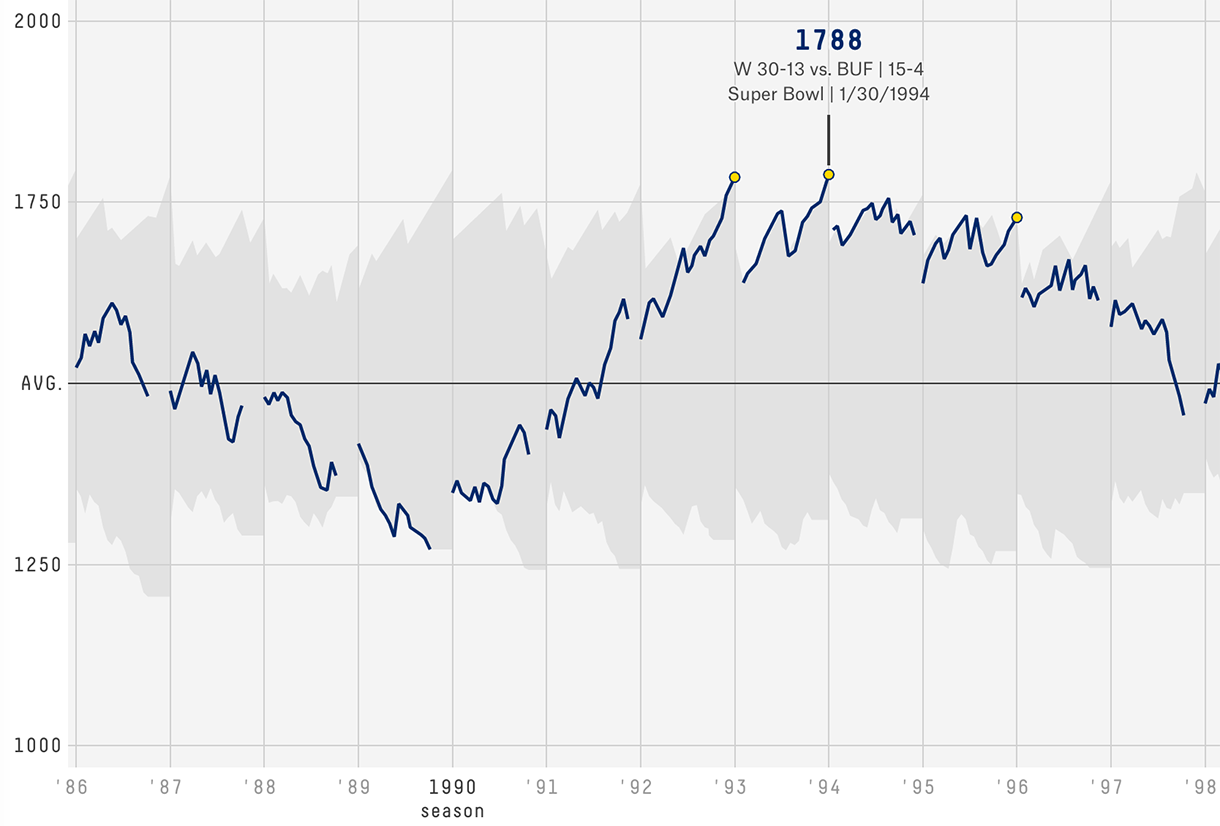 The Cowboys sent Pro Bowl running back Herschel Walker to Minnesota in exchange for a bevy of players and picks, which led to the drafting of running back Emmitt Smith, safety Darren Woodson and defensive tackle Russell Maryland. All three became huge contributors for Dallas, while Walker never surpassed 200 carries or 1,000 yards in either of his two full seasons with the Vikings. It was one of the most lopsided deals in NFL history.

The payoff wasn’t immediate. The Cowboys finished the 1989 season at 1-15, bottoming out with a 1271 Elo rating. They’d make the playoffs two years later and win the Super Bowl the following season — the first of three titles in the 1990s. The Cowboys’ Elo rating after that championship game, in January 1993, was 1784, a gain of over 500 points in just three years.

Green Bay Has Been Good For A Long, Long Time 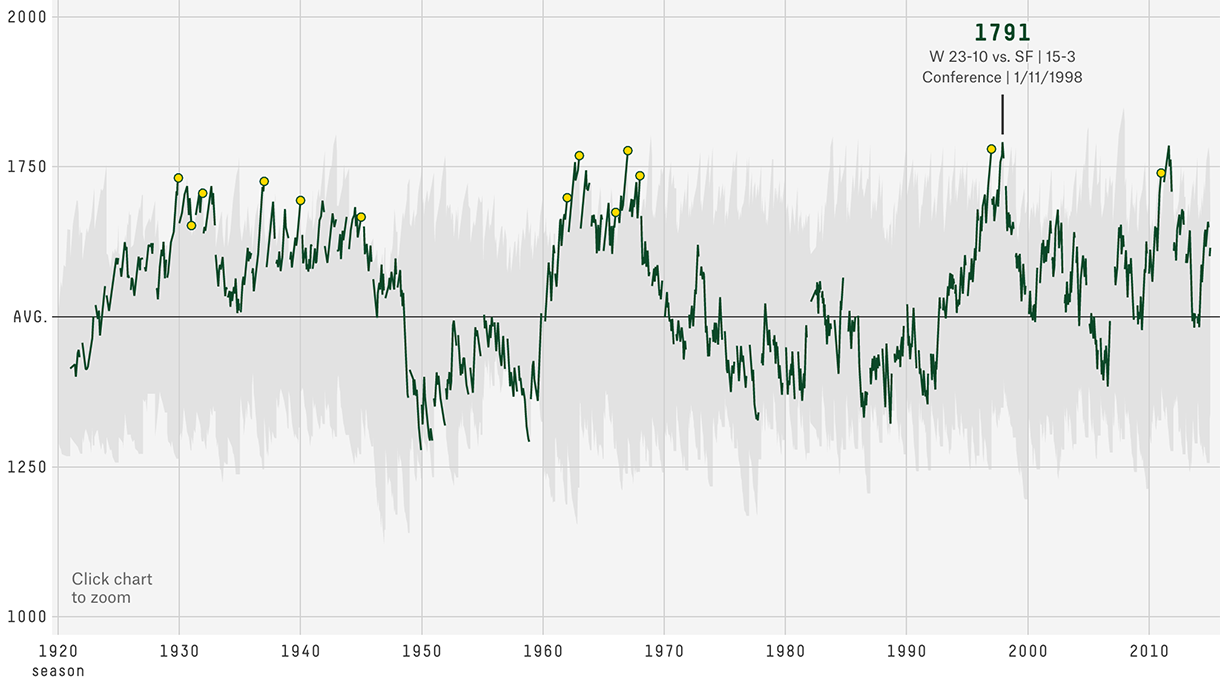 Before anyone cared about the NFL, Green Bay dominated it. The Packers have won 13 championships — more than any other team. But nine of those came before the Super Bowl era, and two more were captured before the AFL-NFL merger in 1970. The team’s very existence is a living reminder of the NFL’s longevity: If pro football had emerged in the 1960s instead of the 1920s, there’s almost no chance that Green Bay, Wisconsin, would have gotten a franchise.

The Chicago Bears also won a slate of titles (eight of their nine) before the Super Bowl era, reaching their peak Elo of 1804 during the 1942 season (narrowly edging out the 1985 team). But the Packers have had more modern success — their peak of 1791 came in January 1998, when a Brett Favre-led squad won the NFC championship, one season after winning the Super Bowl. Green Bay nearly matched this figure in 2011, when Aaron Rodgers led the team to a 13-0 start. 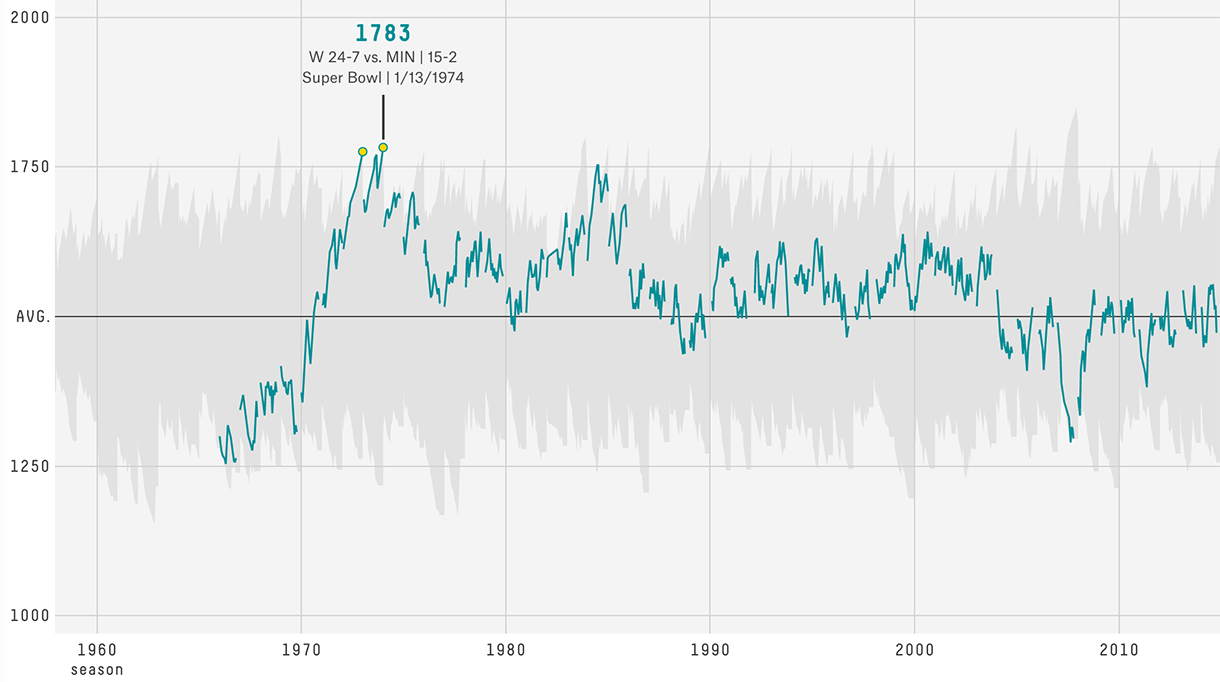 Early fans of the Miami Dolphins — who joined the NFL in 1966 — didn’t have to wait long for success. The Dolphins had their first winning year in 1970, and just two seasons later, they won the Super Bowl with a perfect record, the only team in NFL history to do so. The next year, Miami made it back-to-back championships, hitting an Elo peak of 1783 after the title game.

The team never reached the same heights again. A resurgence in the 1980s led to two Super Bowl losses (one a complete thrashing) and an Elo high of 1754. Miami’s historical curve is in some ways comparable to that of the Jacksonville Jaguars, a lesser Florida team. While the Jaguars have never won a title, they peaked just a few years after their creation, hitting an Elo rating of 1715 in Week 15 of the 1999 season. They went on to lose the AFC championship game, and despite a brief revival a decade later, they have never returned.